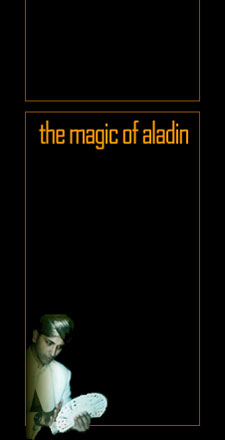 a meeting with aladin is like being a king-cobra bewitched by the snake charmer's tune. fitting what's happening before your eyes into an everyday explanation first becomes very difficult, then less important, as you follow this contemporary pied piper in his wanderings through the crowd, half hoping to disappear yourself.

entirely self-taught, aladin is one of only two Golden Turban members of the Magic Academy of Bangalore, India, guardians of the world's oldest magic tradition. he is also a former International Magician of the Year and has been a Selected Artist at the National Review of Live Arts U.K.. aladin's ventures in entertainment include being commissioned by private clients in Las Vegas and Monte Carlo as well as in London (Hurlingham Club, Sanderson Hotel, Peacock House etc.), opening onstage for artists ranging from Paul Weller to Mark E. Smith, and as Master of Ceremonies and co-organiser of the world's biggest magic event (800 magicians from around the world converging on the city of Bangalore). several British and international television channels have projects currently in development involving aladin as a principal.

in his work, including his capacity as "London's official alkhemist", aladin resonates with some of the oldest known traditions of dealing with unseens. eschewing the stage glam of popular illusionists aladin remains true to his foundations as a social alkhemist. "I respond to how people are feeling," he says. "I don't just do tricks for them."

aladin works across the medium of magic. In conventional terms his methodology includes close-up, manipulation, stage illusions, stand-up and mentalism but the most important aspect of his magic is 'why?'.

"Do I have something to 'say' in the context of where I am meant to be performing? I'm not into going into a 'muscle-building convention' situation where you just go in for the audience to 'ooh!' and 'ahh!' over your physique; in other words I can't just bring myself to 'do tricks' to impress. You wouldn't ask a painter to go off and impress you with two colours and a brush."

aladin knew he would be a magician at two and a half years old, when his father vanished his favourite toys into a ceiling light at their home. this was by way of encouraging the young aladin to follow the example of the assorted objects and go to bed!

chasing magic in restaurants, on T.V., in the circus and through wonderful storytellers, he was in his mother's hometown of Dhubri in the north-eastern Indian state of Assam when one of his young uncles crushed paper tissues into fist-sized balls and got them to vanish from his hands. during his next visit to India the uncle showed him how he did the illusion and from that point on aladin embarked on the course of an alkhemist and magician.

aladin was drawn to the way magicians he saw performed with real grace, humility and generosity. "even though i was a child i felt i was being included and listened to when they were performing," he says. watching street magicians in India, Pakistan and Bangladesh, aladin was absorbed by the quality of communication used by these entertainers. "these entertainers were [and are] at the bottom of the social pecking order in a region where class status is a very big deal with real practical consequences. so these magicians didn't have respectful, pliant audiences but ones who were really challenging - grabbing at props, standing behind, being subversive and unruly when invited to assist. in these conditions the magic had to be very real to come across - which it absolutely was.

"thinking back, there was also an incredible poetry and dignity about the really rather fragile existence of these quite homeless, itinerant and often unappreciated artists. i've never been in that kind of struggle but i always hold those early memories and impressions close to me - it's a kind of touchstone for how my magic develops."

as a person trying to connect with deeper issues, aladin always seeks to marry an authentic interest in real and metaphorical audiences into his magic. reciprocity, exploration, equality, a sense of something shared are the key aspects of the aladin experience.

"i don't want the way i do my magic to create barriers between myself and others or to enhance my status. actually, that's my fundamental problem with so much of what passes for 'popular' entertainment - this business of accentuating the inequality between performer and audience; it's unnecessary and ultimately limits the aesthetic value of what we do - we become unwilling to take risks for fear of falling flat on our face."